In 2019, I made a goal to teach myself to say “no” more. Naturally, that didn’t work. As the year comes to an end, I think that in the process of teaching myself the shaking of the head and forcefully saying “no, nah, nope, nei”, I rediscovered the fun that comes from saying yes.

Like that Wednesday about a month ago, when I was drinking wine at Wine Garage in Muyenga (a Wednesday tradition), and someone across the table says “We are climbing Mount Sabyinyo next weekend. Do you want to join?”

Nevermind that I had met the person asking the question that very same evening, my instinctual answer was “Sure!”. Followed by: “Where is Mount Sabyinyo?”

And that’s how I ended up in a car eight days later headed west. In the car were four other people, three of whom I’d only known for eight days. Our destination: a mountain on the border of Rwanda, DRC and Uganda.

Mount Sabyinyo (second peak from the right in the photo below) is part of the Virunga Mountains, a mountain range that stretches along the border of Uganda, Rwanda and the Democratic Republic of Congo.

Sabyinyo overlooks the Ugandan town Kisoro, where we spent the night in a guest house that had seen better days. Unlike Kampala, Kisoro is cold. Having been to the west several times now, however, I have learnt to pack my woollen sweater and thick socks. That being said, the fact that I now consider 14°C cold most likely makes my Viking ancestors roll over in their graves.

Kisoro is a good 10-hour drive from Kampala, but as you drive west the roads transform from the potholed mess that is the capital, to freshly tarmacked freeway. When you pass Mbarara and get closer to Kabale, you climb mountains on steep, winding roads that make your ears pop. Every turn reveals another spectacular view and you are left wondering why you don’t spend every weekend in the west.

We arrived in Kisoro after dark, and after a quick dinner got to bed to get ready for what we knew was going to be a long and strenuous day. We awoke before the roosters at 6 am. After a breakfast of meat pie and milk tea, we made our way to the Mgahinga Gorilla National Park and the trailhead for Mount Saybinyo.

After a short security briefing (the mountain is home to both elephants and buffalos), we set off with an entourage of mandatory armed guards.

The first 45 minutes took us through bamboo forests where gorillas were hanging out in the trees watching us pass by.

Once through the forest, the elevation picks up rapidly as you make your way up the winding trail surrounded by trees covered in shaggy moss.

As we got closer to the first peak, we encountered the stairs that give the trail the nickname “Stairways in the Mist”, not unlike my favorite hike in Hawai’i: Stairways to Heaven.

43 minutes after I started cursing the fact that I never use the stairs at the office, we reached the first of Sabyinyo’s three peaks. We had a victory shot of whiskey and then moved on as the mist started to surround us and obscure the trail.

As we reached the second peak, thunder rumbled in the clouds above us and the wind picked up speed. 3537 meters is not somewhere you want to get stuck in a storm, so we powered on to the third peak.

Through rain and hail, we summited the third peak. The hail was coming at us sideways as we took some hasty photos to prove that we had reached the border situated at 3669 meters above sea level.

Drenched to the bone, we quickly turned back and climbed down the stairs again, eager to get home to dry clothes, a warm shower and a hot meal. Down meaning back the way we came, which included re-summiting the second and first peaks without slipping in the rain and falling to our deaths.

As we reached the bamboo forest the sun came out again, and we slowly regained the feeling in our fingers (next time I’m packing gloves!). We said goodbye to our armed entourage at the edge of the forest and headed back to our guesthouse to pass out.

While I will continue to stand in front of my mirror every morning and practise saying “no”, the best stories start by saying “yes”. 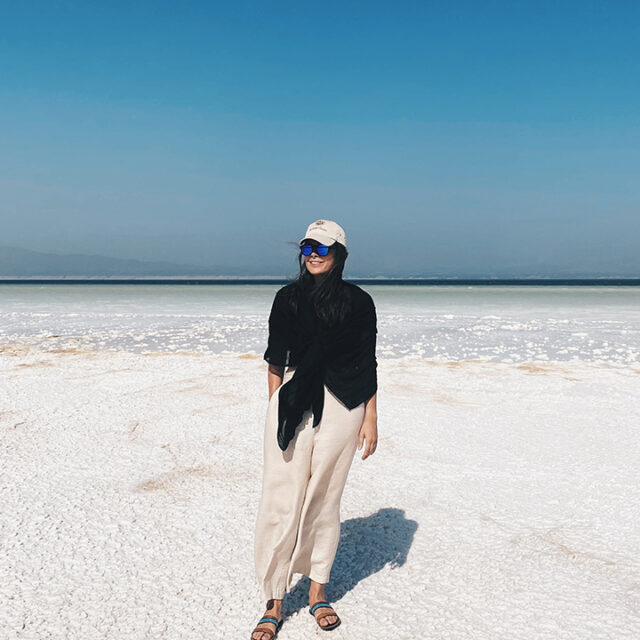